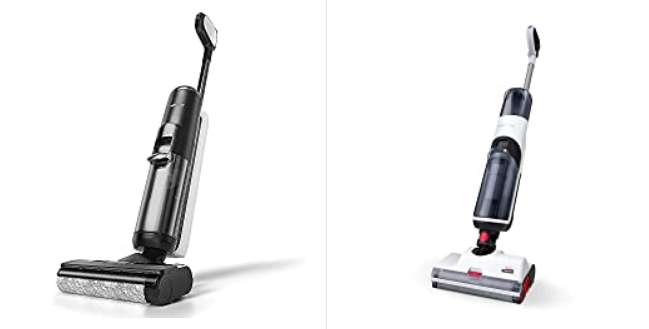 There is a lot of competition when it comes to cordless wet dry vacuums. Two brands you may have heard of are Tineco and Roborock, but which of these is better? Our Tineco Floor One S5 vs Roborock Dyad review will compare these directly to show you which is right for your apartment or home.

Our Roborock Dyad vs Tineco Floor One S5 review will compare these based on their brushes, suction power, water tanks, battery life, software, and anything else we can find.

Both have their pros and cons. We think that Floor One S5 is more well-rounded, but Roborock Dyad has a better brush system. Read on to see which is the right one for you.

Each of these cordless vacuum mop combos offer fantastic brushes, and they each have a specific advantage that you’re sure to love. We found that the Roborock brush was somewhat better, but many people will love Tineco’s special feature.

The Tineco S5 Floor One brush was made for hard surfaces and it’s soft, but also capable of cleaning up tough messes with ease. This brush is also good for pet hair, and it has a self-cleaning cycle when the vacuum is docked.

The best thing about the brush is how it sits in the vacuum head. You’ll see that the brush is pushed to the side, which makes it one of the best vacuums for edge cleaning. It gets right against the edge and removes dirt, dust, and other particles.

Roborock Dyad has similar brushes that work on hard surfaces, and it also features a self-cleaning cycle when the vacuum is docked. The special feature you get here is that Dyad has two brushes.

Not only does this give you better cleaning performance, but one brush cleans the other. This means that you pick up particles faster, and it’s more sanitary.

Overall we found that both are great. Those who want better performance will prefer Roborock while those who want superior edge cleaning should choose Tineco S5.

Suction power is largely the same when it comes to Tineco vs Roborock. We found that they rivaled each other quite well, and they were both able to clean about the same amount of debris and wet messes with ease. While neither is capable of working on carpets or rugs, they have no problem cleaning hard surfaces.

Even though Tineco felt stronger, the Dyad Roborock was a little better at performance due to the extra brush. Between the two it’s hard to say which is better and they feel almost equal.

We’re going to call this section a tie. The good news is that both are able to effectively clean your home, and they’re both good at dry and wet messes.

Now you might be wondering why two tanks are even needed with mop vacuum combos. You’ll find this with most modern models and it’s because it keeps your floors clean and sanitary. Normally when you have a mop you have just one bucket. Unfortunately, that water gets dirty and then you end up using it on your floor.

Two tank technology avoids this. You load clean water and solution into one tank, and then the dirty water tank sucks up and stores all the dirty water. As you can see, it’s safer and cleaner.

This is functionally a tie since both water tanks are effectively the same. We think Tineco is a little more balanced, but you should find that both are able to clean your whole home with ease.

Here’s another tie. Both have exceptional battery life and are able to last long enough to complete your entire home. As wireless vacuum mops, you’ll need a good battery life to ensure you can clean every room in your apartment or home. While some cheaper models skimp on the battery, both of these are able to last a long time.

The battery life here for both vacuums is 35 minutes. That’s very good, especially when you consider that you can often finish your home in about half that time. This gives you plenty of time to finish every room in your home without having to rush.

Keep in mind that 35 minutes is the longest you’ll get. If you need to use high-power mode, then this will draw more energy from the battery. Try to use low-power mode as much as possible to get the most out of your vacuum.

Once again we see that both have great features. However, we firmly believe that Tineco S5 has far better software and integration. You’ll see why in a moment. While they have some similar features, Tineco does them better than Roborock.

Let’s start with app integration. You don’t get this at all with Roborock Dyad, but it’s a standard feature with S5 Floor One Tineco. This allows you to connect your phone and vacuum so that you get detailed information about the vacuum. The Tineco app will show you if there are any errors, how much battery power is left, how well the vacuum is performing, and much more.

One feature both of them share is dirt detection. However, Tineco does this much better. They each have a compass that displays blue and red. Blue means the area is clean, but red means that dirt is detected.

The difference between them is that Tineco has 360-degree detection while Roborock only detects what’s right in front of you.

Another similarity is that they both have voice guides. This tells you exactly what is happening with the vacuum, such as changing modes or cleaning the brushes. It’s useful, and we’d say it’s about the same with both.

While there are some similarities here, we found that Tineco was far better in the tech department.

What is the Difference Between Tineco Floor One S5 and Roborock Dyad?

Curious about what is the difference between Roborock Dyad and Tineco Floor One S5? They were very similar in some ways, but also very different in others.

Let’s start with the similarities. They both have fantastic brushes that work on hard surfaces. They also feature a similar level of suction and performance, and they also have the same battery life. Another similarity was the large water tanks, which allow you to clean the home without having to stop.

Now for the differences. Going back to brushes, Tineco was set to the side for better edge cleaning while Dyad Roborock has two brushes for better performance. While the water tanks evened out, Roborock has a slightly larger clean tank while Tineco has a larger dirty tank. In terms of software, while Roborock had dirt detection and voice guides, Tineco has far better dirt detection, the same voice guides, and the addition of app integration.

So, who wins when it comes to Tineco Floor One S5 vs Roborock Dyad? Both are fantastic, and it really depends on what you’re looking for. Overall we think that Tineco is better due to its balanced water tanks, enhanced edge cleaning, and fantastic software. However, Roborock has some great features, such as having two brushes and somewhat better self cleaning.

Hear about the best deals on Bissell, Tineco, Roomba, and other fine home appliances!